Have you ever wondered about the Significance of the number 108? Why do we do 108 Backbend Dropbacks or 108 Sun Salutations in Yoga…? 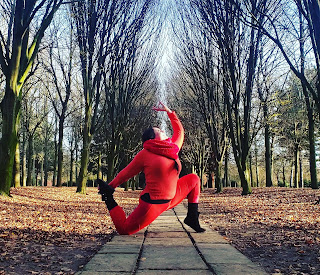 A japa mala or mala is an eastern rosary with 108 beads. The mala is used both in Hinduism and Buddhism for counting mantras, chants or prayers. 108 has been a sacred number for a long time, and this number is explained in many different ways.
Traditionally, Buddhist have 108 beads, representing the 108 human passions that Avalokiteshvara assumed when telling the beads. This number ensures a repetition of a sacred mantra at least 100 times, the extra beads allowing for any omissions made through absentmindness in counting or for loss or breakage of beads.
Sometimes smaller divisions can be used: 108 is divided in half, third, quarter, or twelfth, so some malas have 54, 36, 27, or 9 beads.
Regardless of the meaning of 108, it is important that if a mala is used to count mantras, the mantra be given sincerity, devotion, feeling, and full attention.
108 may be the product of a precise mathematical operation (e.g. 1 power 1 x 2 power 2 x 3 power 3 = 108) which was thought to have special numerological significance.
POWERS of 1, 2 & 3 IN MATH: 1 to 1st power=1; 2 to 2nd power=4 (2×2); 3 to 3rd power=27 (3x3x3). 1x4x27=108

Eka pada koundinyasana II (pose dedicated to the sage Koundinya II) is a split-legged arm balance that is sometimes dubbed "flying splits" as it resembles a front split hovering away from the floor. 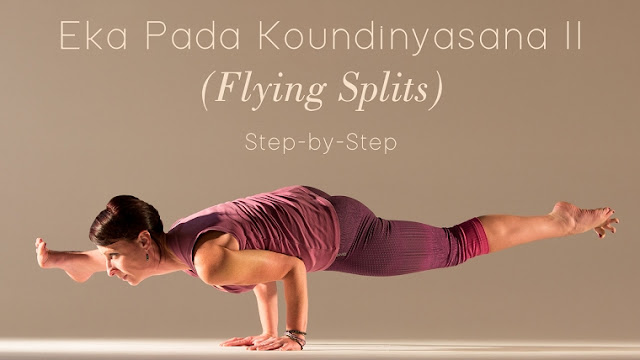 This challenging asana has become a staple in many vinyasa classes:
"From downward facing dog, inhale, lift the right leg up; exhale, knee to chest; inhale, back to three-legged dog; exhale, bring your right knee to your upper right arm, and—if you want—you can take it into eka pada koundinyasana II."
Sounds familiar?

Like with many arm balances, maintaining a chaturanga - like arm position is essential for a safe, sustainable eka pada koundinyasana II. As you practice chaturanga, pay special attention to keeping the fronts of your shoulders lifted away from the floor (they should remain as high as, or higher than, your elbows as you lower), and staying broad through your collarbones and chest.

The initial flying splits setup described below starts with a lizard variation and moves into a "leg over arm lunge" (sometimes called "airplane lunge" if you extend both of your arms out to the side like "wings"), making poses like these especially useful preps.

Poses like these are great for learning to work your leg up over your arm too, and will also help to prepare your hips for eka pada koundinyasana II.

And other poses that stretch the hamstrings, like utthita hasta padangusthasana, supta padangushthasana, and hanumanasana.

This variation provides you with another great way to stretch your hamstrings, and gives you a chance to practice walking your front foot forward at a diagonal (like you will in your peak pose) from a more stable position, making a shape that's likely more similar to the shape you'll make when you're airborne than a traditional split is.

If you (or your students) are facing similar frustrations with eka pada koundinyasana II, or if you're just looking to more deeply explore and refine your "flying splits," you might find the following step-by-step breakdown to be useful. And while there are certainly those who will prefer the three-legged dog transition, or find it to be easier initially, you may even (like me) discover that after playing with coming into the pose via lunge for a while, incorporating it into your vinyasas (via the three-legged-dog transition) seems a lot more accessible!

How to to it

Don't be surprised if one side differs wildly from the other! Once I learned to hover both legs off the floor on the right side, it took me some time before I could do the same thing on the left side! If you too discover that one side is considerably more challenging than the other, try starting with your "harder" side the next time that you practice this pose. This can help to ensure that you spend just as much time (if not a little more) on the side that could use a little more attention.

Balance out your practice with a few favorite backbends, like shalabhasana (locust) variations, dhanurasana (bow pose), setu bandha (bridge pose), or urdhva dhanurasna (upward facing bow/wheel). From there choose one or two grounding finishing poses, like a simple forward bend variation of pigeon, or a figure four stretch before settling into a blissful shavasana!

BenefitsA challenging arm balance that helps you build a strong core, shoulders, and legs
Instructions
1. Begin in Tadasana, facing the right side of your mat. Keeping your knees together, come into a squat, lifting your heels and rooting down with your big-toe mounds, hands in Anjali Mudra.
2. On an exhalation, take your right upper arm to the outside of your left thigh, twisting to the left. Gaze forward, chin in line with your sternum.
3. Place your hands on the mat pointing forward, shoulder- distance apart, with wrist creases parallel to the front of the mat. Now you’re ready for takeoff into Parsva Bakasana (Side Crane Pose): Lift your hips and extend your sternum away from your navel. As you reach your breastbone toward the front of your mat, shift your weight forward until your feet become light and you can draw them toward your buttocks. Continue pressing into your big-toe mounds to keep your legs active. Keep your elbows pinned into the midline and stacked over your wrists. Bring your knees as close to your right armpit as possible and try to keep your weight off the left arm.
4. Exhale and start to straighten your legs. Engage your quadriceps and vigorously push your right femur toward the wall behind you as you press into the right big-toe mound. Simultaneously press forward with your left big-toe mound to re-create the legs of Revolved Triangle Pose.
  5. Now that you’ve found the basic shape of the pose, refine it. Come back to the shoulder work from Chaturanga Dandasana, lifting the heads of the shoulders away from the floor so that your upper and lower arms create a 90-degree angle. Recall the idea of a taut rope being pulled in two directions. Anchor the pose by pressing into your right big-toe mound and then set sail with your sternum and the crown of your head. Use the breathing pattern from the twists to deepen the pose: Inhale to find more length along your lengthen your front body. central axis; exhale to rotate by taking your left  leg farther to the right and your right leg farther to the left. Take 4–5 breaths. Then, to come out, exhale and sweep your left leg back and into Chaturanga. There’s no secret strategy to this exit, just a continuation of the themes you’ve explored throughout the sequence. Maintain the integrity of your shoulders and the intention of staying long, head to toe.
 
Stay Safe
 If you try to lean on both arms as you move into Parsva Bakasana and then Eka Pada Koundinyasana I, your chest and shoulders will collapse and you will lose the vitality of your central axis. When this happens, the potency of the pose is dissipated; gravity wins and the shoulders become compromised as they roll forward and down. Keep the heads of your upper arms lifted, and actively lengthen your front body.
at 09:00:00 No comments:

Ready for the new day?  
You'll only see me in Bannatyne's today...
9am bootcamp
10am pilates
11am yoga
Namaste 
And of course - happy Easter! 